We have been breeding off and on for many years ! We fell in Love with the Maine Coon breed and knew it was our destiny to share the love these amazing cats offer..  Maine Coons are the largest of all domesticated breed cats, tis given the nickname “gentle giants” They are “dog-like” in nature and can be very loving and social companions .. Many can be trained to fetch toys and they are known for their love of water .  We are very selective in placement of our kittens and we follow them throughout life after they leave our cattery ..  All kittens are sold on a spay/neuter contract.  Breeding rights are limited & on a case by case basis to approved experienced catteries ..

We are a small home cattery & All of our breeder cats are OUR PETS & family . They live inside our home and have free access to the whole house! They are NOT and never will be crated or caged or kept outdoors!

Motivated by a passion for animals and deep understanding of quality pet care, we continue to serve a growing client base and expand our service offerings to meet their needs. When you and your furry friend come to Jaycee’s Maine Coon Cattery, you become part of our family for life.    We have many references and invite you to join our Maine Coon Family 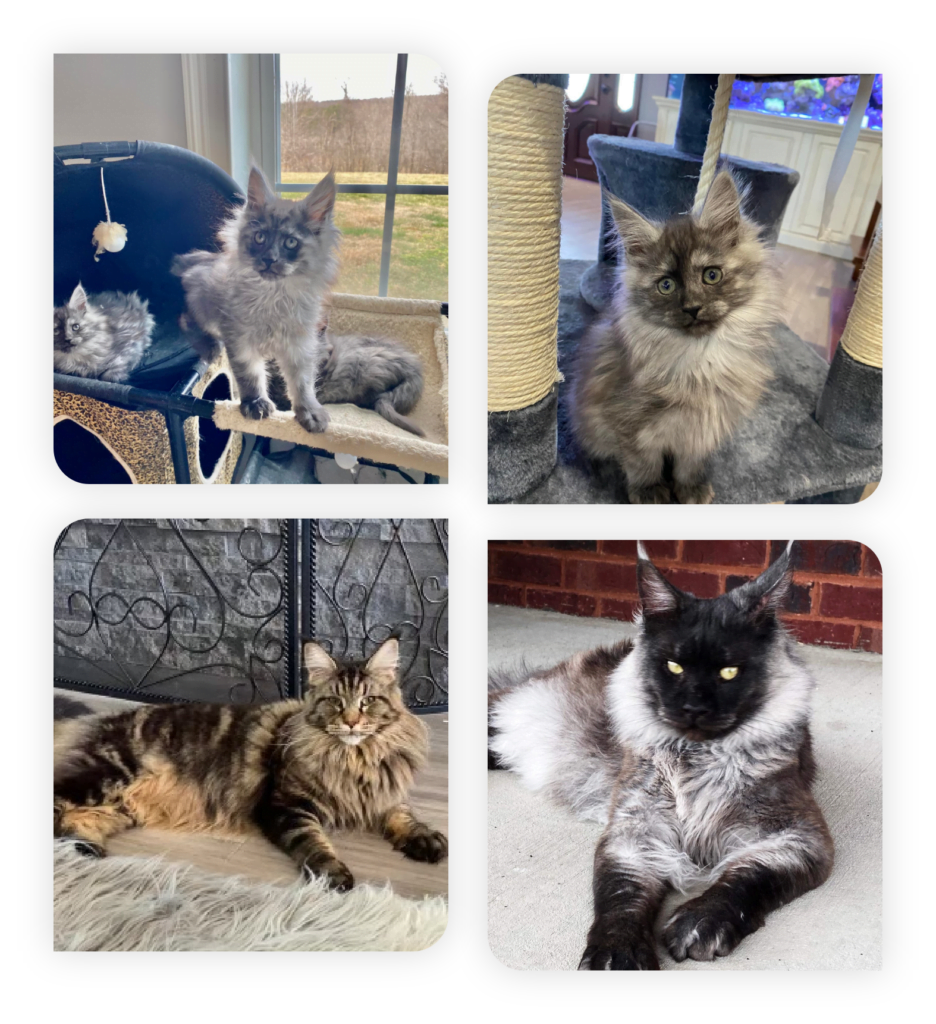 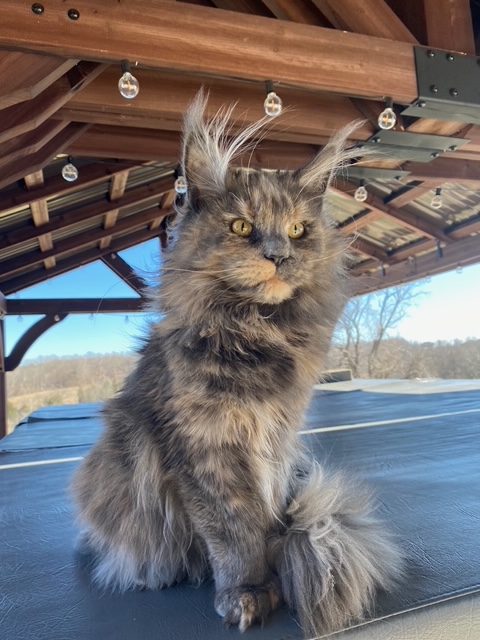 The Maine Coon is the largest domesticated cat breed. It has a distinctive physical appearance and valuable hunting skills. It is one of the oldest natural breeds in North America, specifically native to the US state of Maine, where it is the official state cat.

Maine Coons evolved to survive harsh winters by developing characteristics like large, tufted paws that serve as built-in “snowshoes” and a thick, bushy tail they can wrap around their bodies when they’re cold.

Their crowning feature is a dense, water-repellant coat that’s longer on the stomach, ruff, and flanks. These shaggy sections keep a Maine Coon’s lower body warm when it sits on or walks across ice or snow. The fur grows shorter on the shoulders, allowing the kitties to romp through the woods without getting snared by tree branches or bushes.

Maine Coons are often thought to be synonymous with their brown, raccoon-like coats. They actually come in all kinds of colors and patterns, including smoke, cream, cameo, mackerel, and tortoiseshell. But Maine Coon owners don’t breed cats with lilac, chocolate, or Seal Point Siamese coloring—the Cat Fanciers’ Association (CFA) disqualifies against these colors, since they indicate hybridization.

Maybe it’s due to their dense, moisture-repellant coats, but for some reason, Maine Coons love water. While other cats will steer clear of a full bathtub, a Maine Coon will likely jump into it.

A large part of the history of the Maine Coon cat is the polydactyly genetic trait. A polydactyl cat is one that has more than the regular amount of toes on any of their paws. This is a trait that dates back to the first known Maine Coon cats. The trait is also hereditary. Most polydactyl Maine Coon cats will have polydactyl kittens and it can continue for generations.

Having polydactyl paws are not harmful to the cats and are fully functional. Historians believe that this is a trait inherited from ship cats that needed more balance and grip than land cats. This theory goes hand in hand with the origin theory of Maine Coon cats being descendants of ship cats.

The polydactyl trait in Maine Coons is particularly notorious as part of their history because it influenced their appearance and participation in cat shows. Not only that, it has greatly influenced the way in which they are carefully bred by the Maine Coon community.